Noah and I join Mike in his rooms in the Executive Hostel on the RIM campus. We are the only guests. Chokie, the head cook serves us breakfast and dinner there. I get my first taste of the most common Bhutanese dishes, red rice and peppers in cheese sauce. Red rice is only grown in Bhutan. It has round grains and a nutty flavor. I had trouble imaging what peppers in cheese sauce would taste like. The green peppers are cut into strips about a half an inch width and three to four inches long. The cheese sauce is thin and white. It’s good. On potatoes, it tastes like au gratin.

The RIM campus is about 7 km south of downtown Thimphu, just up the next valley. Lawns surround all the buildings which are constructed in the Bhutanese style, with white plaster walls, colorfully painted prominent timbers around the windows, and wide over hanging roofs in two or three layers. The roofs are corrugated metal these days, but painted red or green. The main instructional and office building is in the shape of an H, giving it four wings and two three-sided courtyards. The central part of the “H” has four roof levels, the top one painted gold with a short spire. One of the courtyards contains a rose garden, the other is just lawn, use for official events. Cement walkways, about 5 feet wide, surround each building. A drain is cut into the walkways right under the edge of the roofs. The faculty housing buildings have sets of four auspicious animals painted between their first and second stories, a tiger, a snow leopard, a magical bird, and a dragon. These same animals are seen on house in Thimphu. Tall Himalayan blue pines line a Wang River tributary, running right outside our window, clear and rocky. It’s rushing actually kept me awake the first night. 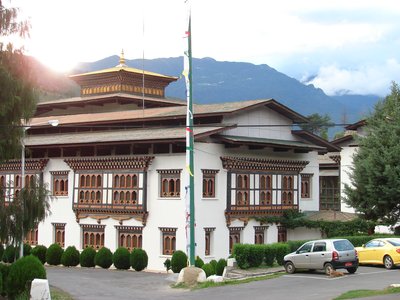 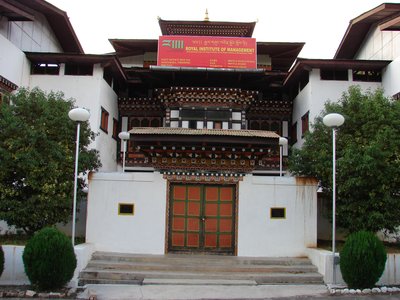 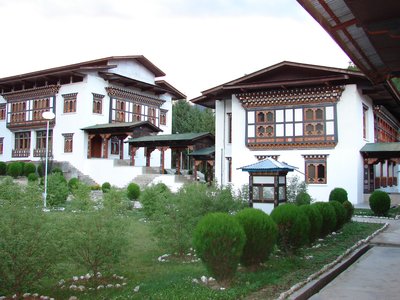 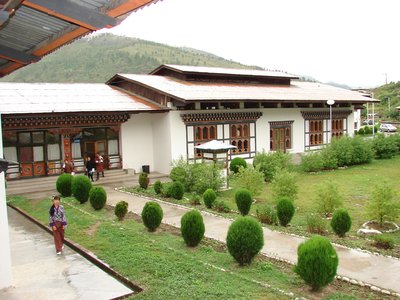 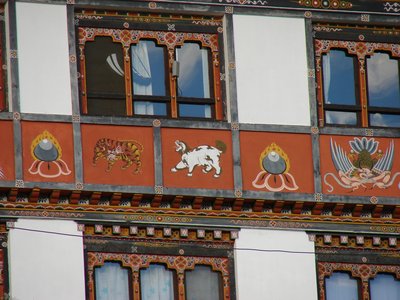 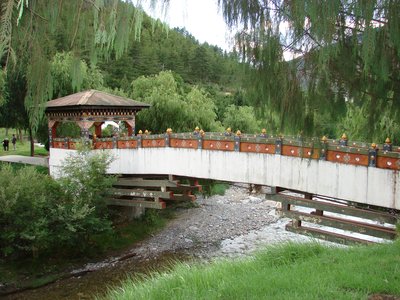 We join Mike in the last two days of his orientation program. Saturday morning, a driver takes us and our guide, Thinley Namgyal, a senior RIM faculty member, to pick up the Japanese volunteers and drop us all at the Jigme Dorji Wangchuck National Referral Hospital. The director of the hospital gives us an powerpoint overview of the Bhutanese health care system. Noah was a real trouper through it all. Then we take a tour of the hospital, which is really, really crowded, just room enough to walk. After lunch in the Wangchuck Hotel, we visit the National Textile Museum where there are examples of ceremonial costumes and national dress from the royal family. I spend a bit of time finding a bathroom for Noah and so miss the chance to spend money in the museum shop. I’ll definitely have to get back there.

Next we’re told we’re going to the “Valley of the Buddha.” We drive slowly up a lovely forested hill; there are still a few wildflowers blooming in the undergrowth. The top of the knoll is covered with prayer flags, some bright and new, others old and faded. There are strings of many prayer flags and tall single white prayer flags topped with a stylized knife (for wisdom) and wheel (for the lotus blossom). Prayer flags are placed on hilltops so the wind will carry the prayers to all sentient beings. If the hilltop overlooks a river, the water can carry the prayers even further. The tall white prayer flags are also erected in yards or on the edges of gardens, and min versions appear on rooftops. From here, we can see all of Thimphu. 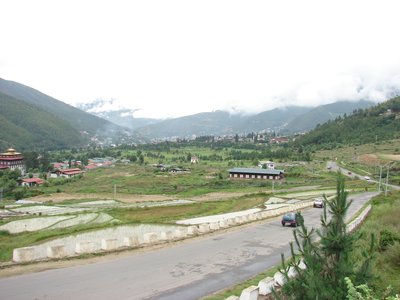 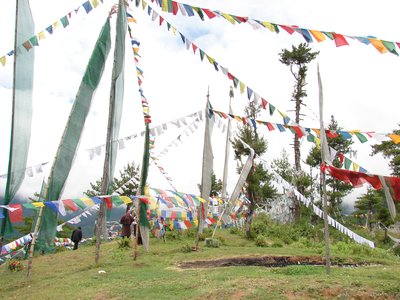 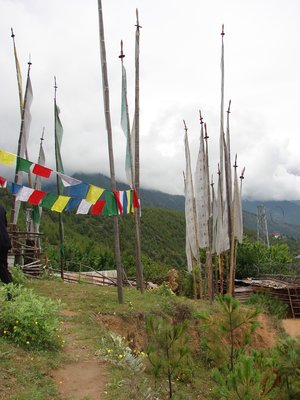 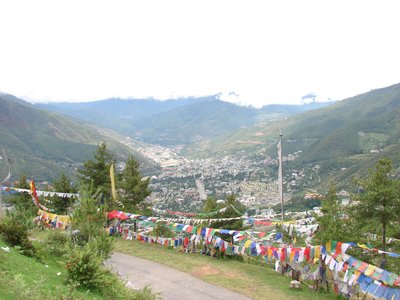 Dogs are everywhere in Bhutan. They are not pets, not brought inside, but are allowed to roam freely. Enough people feed them that they are friendly. Certain dogs will hang around certain houses or places and every popular picnic spot has its resident dogs. “The Valley of the Buddha” was no exception. I found three curled up under some bushes that were festooned with fallen prayer flags. 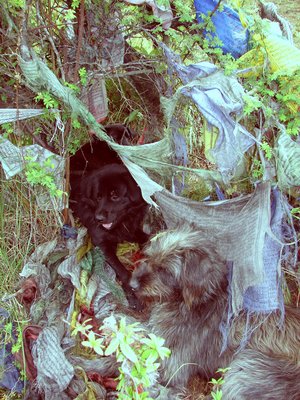 On the way back down, we stop at the Motithang Takin Preserve to see the national animal. The takin is often described as having a cows body and a goat's head. I think it's head looks more like a moose with goat's horns. The takin is said to have been created by Drukpa Kunley, Bhutan's "Divine Madman," in the 15th century during his wanderings throughout Bhutan and Tibet. In one town he visited, the locals demanded that he prove himself by performing a miracle. He first asked to brought a cooked cow and goat. After devouring them, he began to reassemble the bones, putting the goat's head on the cow's skeleton. Then he sent it running on its way and it became the takin. We also see deer and muntjacs in the preserve. 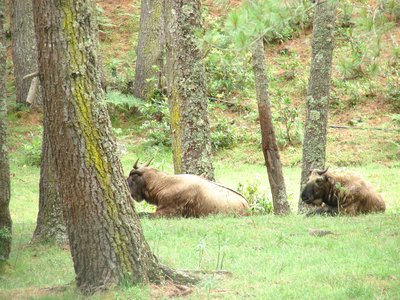 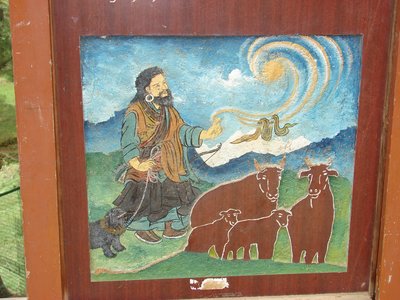 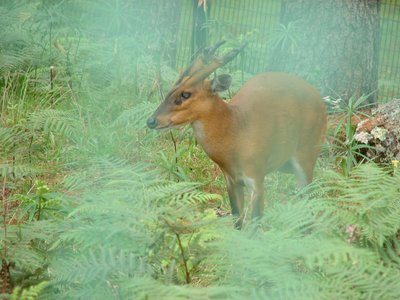 Posted by rsherry 07:42 Archived in Bhutan

Sure enjoyed the pictures, sounds like you are really enjoying yourselves, a trip of a lifetime!

I hope the weather is cooler than it is here, we are having record breaking temps of 105 degrees!

Thanks for sharing! Lynda

Yes, it's cooler than Oklahoma, only in the 80's, I think, but humid. There's a rain shower almost every afternoon, that sometimes cools things off a bit. And some days are more breezy or overcast than others.