On Sunday, all the volunteers and some of the RIM staff and students board buses for a picnic breakfast and lunch in the mountains and a visit to Punakha Dzong. We take the main road south out of Thimphu and catch the main national highway running east. We are soon winding up a narrow mountain road through forests of Himalayan blue pine. We pass women and children on the side of the road selling apples, walnuts, and strings of hard cheese. 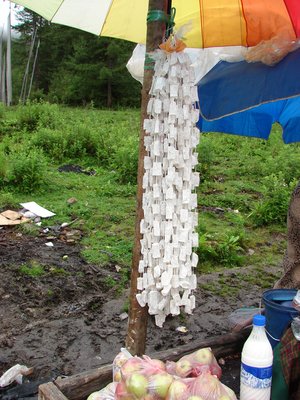 We reach a pass called Dochu La and stop to visit Druk Wangyal, a set of 108 chortens. 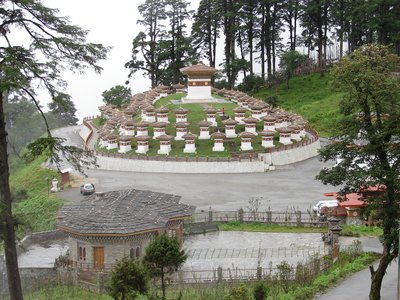 Chortens are small shrines containing a relic or religious text, stupas in Sanskrit. According to our guide book, these were built to atone for loss of life in 2003 during a short military action to flush out Indian separatist hiding in the jungles of Bhutan’s Royal Manas National Park and the neighboring district of Pemagatshel. From here, on a clear day, we would be able to see snow-capped 22,000ft peaks, but it is the rainy season and heavy clouds hang over everything. Still, the nearer, smaller tree-covered peaks look pretty with their wreaths of mist. 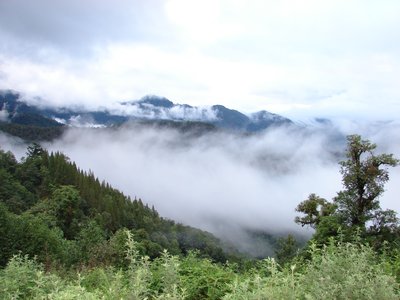 Just up the high from the chortens is a gorgeous temple. Our guide says that this was commissioned by one of the queens to pray for the safety of the king and his troops in the 2003 military action.

Across the road from the chortens, the hillside is covered with prayer flags. 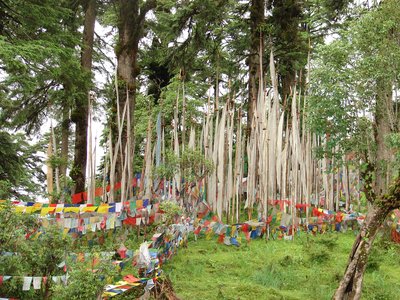 Our next stop is the hub of the Royal Botanical Park. We take breakfast beside a lake and stop in the visitor’s center. The park contains 28 of the countrie's 46 species of rhododendron and over 120 of the over 240 species of ferns, as well as Bengal tigers and red pandas. They’ve began a garden that will contain all 48 rhododendrons. I’d love to stay longer to hike and botanize, but we are hurried on to our final destination. Now the road winds down into another valley. All the hillsides are steep in Bhutan and the valleys narrow. Flat ground enough for a city or an airport must be at a premium. The forest has undergone a change, now it is broad leaved. In the spring, it will be bright with flowering rhododendron. Lower down, the forest takes on a tropical feel, with wild arums, bamboo, and banana.

At the bottom of the valley is the massive Punakha Dzong. 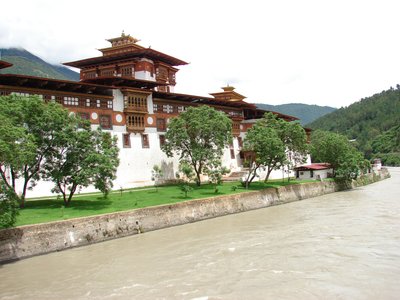 It sits at the confluence of two rivers, one considered male and one considered female. We walk over a cantilevered bridge to reach the dzong. Steep wooden steps, which can be pulled up in case of an attack, lead to the main gates, flanked by giant gold prayer wheels. We first enter a large courtyard, lined with balconies, and containing a huge chorten and a large fig tree, said to be like the one under which Buddha found enlightenment.

The offices are around this first courtyard are for the district government, including its high court. In earlier time the king would move his seat of government here in the winter. The head abbot of the country still winters here. Before we pass through to the second courtyard, there is shrine to the spirit of the lake beside the dzong.

This Dzong is unusual in having three courtyards, rather than two. At the back of the third courtyard is the great assembly hall, with 54 gold pillars and long red velvet benches. But the focus here is three giant gold Buddha statues, said to be the past, present, and future Buddhas. Alternatively, they are said to be Guru Rinpoche, who brought Buddhism to Bhutan, the historical Buddha, and Ngawang Namgyal, the founder of Bhutan. These Buddhas were recently built, the older, smaller three Buddhas still stand between them. We are not allowed to take pictures inside any of the temples.

Between the courtyards and up the four stories of the gate tower, are small temples, seemingly dedicated to Hindu gods. We need to take our shoes off to enter each one. The first one of these we visit is for Tara, mother goddess of all of us and of all gods. Most of our Bhutanese and Japanese companions bow and prostrate in each of these. Additionally, there is small temple outside of the dzong itself, with prayer wheels all around its outer walls. The Buddha statue inside is said to have the ability to talk. 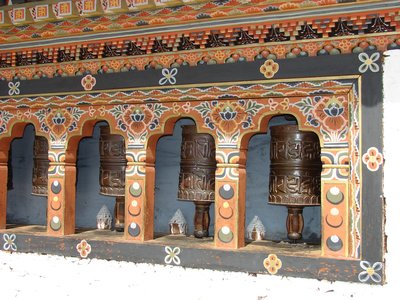 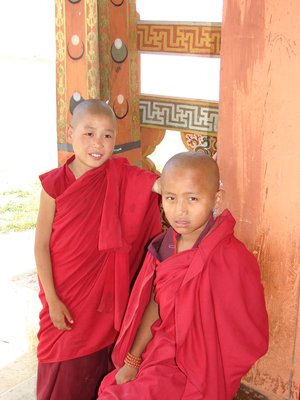 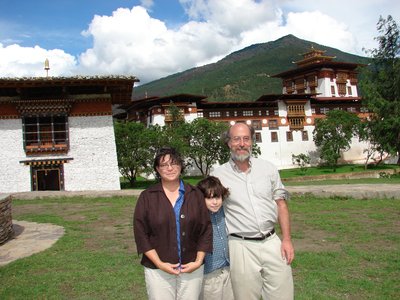 We drive a little further up the road to have lunch in a small pine grove on the banks of the Mo River. To start, we’re served mango juice, beer and arra, a sour rice wine. I take this relaxing opportunity to photograph our companions in their traditional dress, ghos and kiras. There are about eight resident campground dogs that are initially shooed away, but then get our leftovers.

On our way back to Thimphu, on the same road, we make a couple of stops to get holy water streaming down from lakes high above, and one stop to buy giant cucumbers. All this makes for a very long day; we are happy to get off the bus at RIM and reach the end of the orientation.

Posted by rsherry 08:59 Archived in Bhutan