I recently visited one of the most important government and monastic buildings and forts or dzongs in Bhutan--Tashichhodzong. Tashichhodzong was built in 1641 by the founder of Bhutan--Shabdrung Ngawang Namgyal. This immense fortress was rebuilt in 1962, by the third king of Bhutan, His Majesty, King Jigme Dorji Wangchuk. 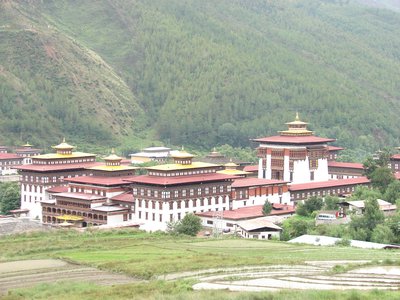 Tashichhodzong, which is located in Thimphu and which translated from Dzongkha means the "the fortress of the auspicious religion" is the modern site of the King of Bhutan's offices and the central monastic body. This large and impressive structure with large golden Bhutanese-style spires on top also contains the throne room of His Majesty the King of Bhutan. Part of the year during the warmer summer months, his Holiness, the Je Khenpo, who is the head of the central monk body in Bhutan also makes his home in this dzong.

The important annual Buddhist religious celebration--Thimphu Tshechu--is also held in this fortress. This very popular festival is held in honor of Padmasambhava or "one who was born from a lotus flower." Padmasambhava is also known as Guru Rimpoche, "the Precious Teacher" or Lopon Rimpoche. Followers of the Nyingma Buddhist school also regard him as the second Buddha. Guru Rimpoche was instrumental in bringing Buddhism to Bhutan and Nepal around 800 A.D.

When visiting Tashichhodzong, I was only allowed to enter the monastic part of the dzong. The King's offices are off limits to anyone except invited important guests and visitors such as ministers, ambassadors, heads of state, or high level monastic and religious leaders. I could only enter the dzong after 5 P.M. and was required to go through an airport style X-ray machine. The dzong is guarded by the Bhutanese army and police. Even so, their presence was fairly low key given the high importance that this structure has for Bhutan. I entered the dzong onto an immense court yard surrounded on three sides by large Buddhist temples. Monks in traditional dress were everywhere. Entering one of the temples without my shoes, which is an important cultural custom here, a large statute of the Lord Buddha quickly came into view. The ceiling of the structure was very high and adorned with finely etched carvings and colorful cloth. Several large kettle style drums were present, which are also used by monks for religious ceremonies and chanting. I could smell a sweet variety of fragrant incense. The monks also have chambers for meditation, domestic affairs, and housing in upper portions of the temple. They use very steep ladders to reach upper floors of the temple. Very carefully, I climbed these stairs to view some of the prayer chambers. I used the same caution going down the steep stairs. This dzong is quite impressive and I will definitely visit it again in the near future.

Posted by mgivel 03:38 Archived in Bhutan