Tuesday (July 7) we began the process of opening a bank account. It requires two passport-sized photos of each of us and took nearly a week. That afternoon, we also moved into the new apartment RIM selected. The building is in Bhutanese style, white-washed with prominent painted timbers. In front of our door is a small garden, and someone has erected prayer flags above the wall separating us from the street. 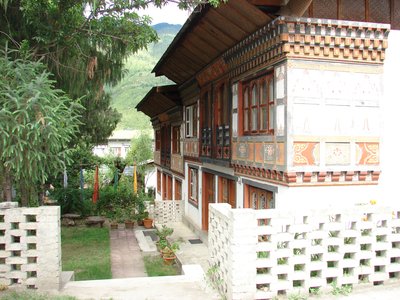 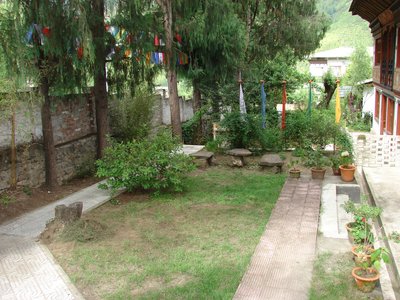 Inside is a wood-paneled living room with western-style furniture, and a rather steep set of wooden stairs. (Though they’re not nearly as steep as those in the monasteries.) Upstairs is a large bedroom with a double bed, a smaller bedroom with a single bed (both paneled in pine), and a bathroom. The floors of the living room and bedrooms are wood too, possibly pine, cedar, or cypress, all of which are common here. Behind the living room is a kitchen, large for an apartment, with a two-burner gas stove, a new microwave oven, a rice cooker, a water boiler, and a small frig. In the cabinets were two pots, two pans, a plastic colander, a spatula, a large holed metal spoon, 4 glasses, 4 cups, 4 bowls, 2 plates, 2 saucers, 2 small dipping bowls, a can opener, a vegetable peeler, a cutting knife, and an assortment of unmatched tableware. I use one of the dipping bowls as sugar bowls because Noah loves hot chocolate, but the “drinking chocolate” available here does not contain sugar. We are in a rather upscale part of town and quite a few small cars, taxis, taxi vans, a few SUVs, and an occasional truck go by. All the guide books say to bring ear plugs because of barking dogs at night, but that has not been a problem for us yet.

We’ve made our first ventures downtown for groceries and restaurants. We’re about a five minute walk from one of the main streets of Thimphu, lined with shops and government buildings, including the National Textile Museum, the National Handicrafts Emporium, and the Bank of Bhutan (BOB). It also has the only intersection with a traffic cop; no traffic lights here. All the roads in Thimphu slope slightly down to the south, or more steeply up to the west, necessitating a set of steps in the sidewalks every block or so. On my first few trips back uphill to our apartment from downtown, I was pretty sweaty. 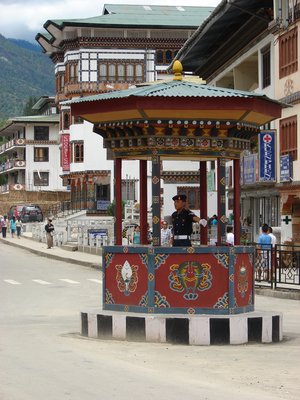 The largest grocery store in town, on clock tower square, is big enough to have shopping carts. They carry most things you’d need, except fresh meat and fresh vegetables. You have to go to meat shops for beef, pork, chicken or fish, and to the officially-sanctioned weekend market for vegetables. Also, stalls in the small “Hong Kong Alley” have the basic vegetables during evenings all week. Mornings, the streets are pretty quiet. Things pick up in the afternoon, especially after five, as people buy ingredients for the dinner on the way home from work, and get loud and crowded after dark. The people on the street are about half men and half women, half in Bhutanese clothing, and half in Western clothing, with a sprinkling of monks in red robes, an occasional woman in a sari or a Hindu holy man. After 9pm, the streets are still crowded but the balance has shifted a little towards more men in western garb. 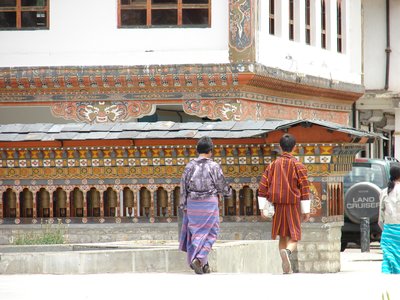 Posted by rsherry 07:27 Archived in Bhutan