Across a covered cantilevered bridge over the Thimphu River are two other parts of the market. The bridge is layered with so many prayer flags that it is hard to look out and see the river. Two old men with hand-held prayer wheels, one at each end of the bridge, beg for small change. Here jewelry, religious and metal items are sold. There are prayer beads, prayer wheels, ceremonial daggers, masks, cups, bells, horns, stylized lightening bolts, even a few flutes made of human bone and skull cups. On my first visit, I didn’t intend to buy anything but I was seduced by an old Tibetan woman who kept lowering the prices on her jewelry. So far, I’ve bought a door pull in the shape of a dog and one in the shape of a horse, a necklace of faux amber and real coral, a set of prayer beads of small skulls carved out of yak bone, and another set of prayer beads of real amber alternating with intricate metal beads depicting dragons and birds. She also sells jackets and hats of yak hair felt and fur. Much of the jewelry here is made from yak bone, as are many carved cups and small Buddha and Tara statues. There are also belts encrusted with turquoise and coral, arrows (for the national sport), darts, and farm implements.

A third part of the market sells clothing, and I have bought something close to the traditional woman’s outfit, a long wrap skirt, a button-less silk blouse with very long sleeves, and a short, button-less jacket. The long sleeves of the blouse are used to create contrasting cuffs for the jacket, which is held closed with a broach, My outfit is only of machine woven cloth, the gorgeous hand woven and embroidered cloth that is the country’s pride is quite expensive. To do the traditional dress right, I need to buy a kira instead of a wrap skirt. A kira is a long piece of fabric that wraps around the body from under the armpits to the ankles and is secured over the shoulders with jewelry made expressly for that purpose. The kira goes over the silk blouse and a tight, woven belt cinches the kira at the waist. 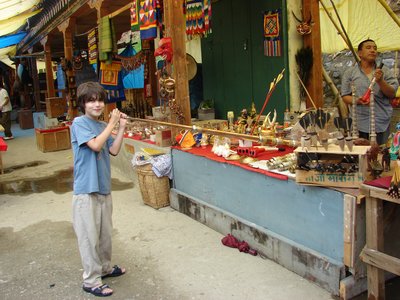 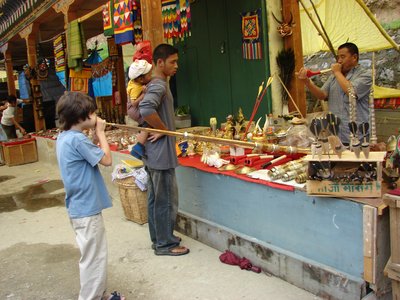 Posted by rsherry 07:33 Archived in Bhutan

Just wanted to say how much I am enjoying your blog. I saw "Travellers and Magicians" for the first time about 4 years ago, and thought Bhutan was beautiful. Would love to visit it myself someday. And, as a teacher, I think this is such an incredible opportunity for your son. Thanks for sharing your journey!

Thank you! If you ever have the time and money, they welcome volunteer teachers here.