I had told Mike to wake me early. I resisted but managed to roll out of bed about six and was on the street by 6:30 am. A taxi came by right away and I headed to the top of Sangaygang (Buddha’s Mountain). We past other eclipse watchers on road. When the taxi was facing east on the winding road, we could see the “big bite” missing from the sun. Only a bright sliver remained. It was cloudy, so it didn’t hurt to look at the sun. Don’t know if it did any damage I couldn’t feel. It seemed appropriate to watch the eclipse from a hillside strung with prayer flags. I was able to watch (in glimpses) the last movements that covered the sun and the gradual darkening around me. Totality looked just like the pictures; the sun became covered by a black disc with a bright glowing rim. Around me it was dark as a moonlit night. Noises of shouts, yells, barking dogs, and banging pots came up from the city below. It seemed to last about 3 minutes; I had forgotten my watch. When a diamond of light reappeared, the whooping stopped and low horns sounded out from the monasteries in the hills. 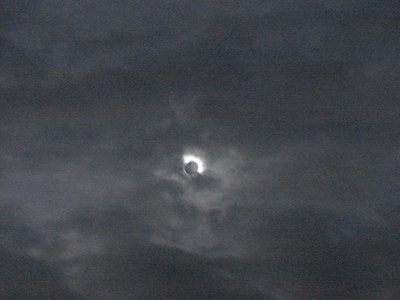 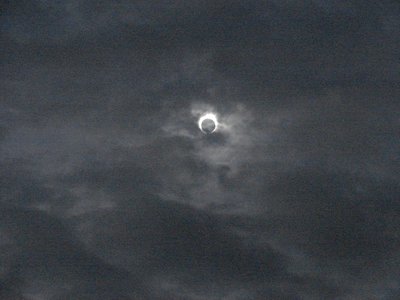 It was simply fascinating to feel the daylight darken and to see the black disc over the sun with its bright corona. As I walked back down the mountain to our apartment, I took more photographs of the prayer flags and of the mini-chortens the devout have tucked into the rocks on the road cuts. They are usually made of buckwheat flour and contain a single grain of rice, wheat, corn, or buckwheat that represents Buddha’s body. They are usually In the shape of a chorten, although some are made in a mold of the Buddha. Some are partially painted blue, or white or red. Making these and placing them in the rocks is an act of faith that builds merit for the next life. 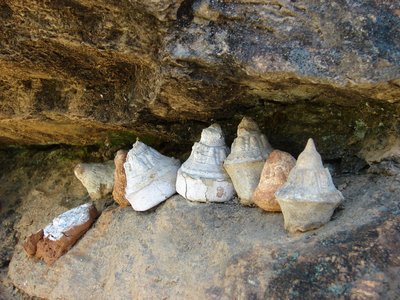 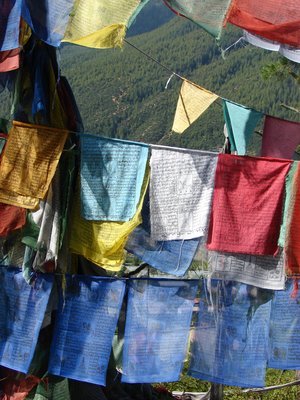 Posted by rsherry 03:19 Archived in Bhutan

I thought of you as we watched the news with stories of the eclipse in India. I'm so glad you got to see it. We love getting the blog and following your adventures.
We're all fine and think of you often.
Love from all

I'm a friend of Jan's. We met at the Bar Mitzvah. I'm really interested in your comments about Bhutan and look forward to reading your future blogs.
Barbara

I'm soooo jealous. Eclipses are fabulous events. I saw the moon eclipsed in the early morning last year with a ruddy maroon and a turquoise cast around the edge.
Thanks for the pictures.
Mary Francis