Thimphu’s Memorial Chorten is both a chorten and a temple in one. It occupies a prominent place in the center of the main road near the south entrance of the city proper; traffic splits to go around it. It was built in 1974 to honor the 3rd King, who wanted to construct a chorten to represent the mind of the Buddha,but passed away before starting that project. 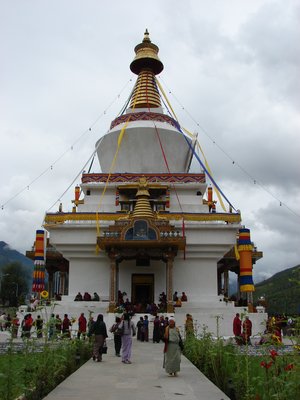 On the day I visited, the grounds were filled with people, some next to the large prayer wheels in the garden, some circling the temple (clockwise only) reciting prayers, but most seated, waiting for monks to distribute a rice and vegetable lunch before an address and blessing by the Je Khenpo (the religious head of Bhutan). It was a "Moelam Chenmo," or Great Prayer Festival. 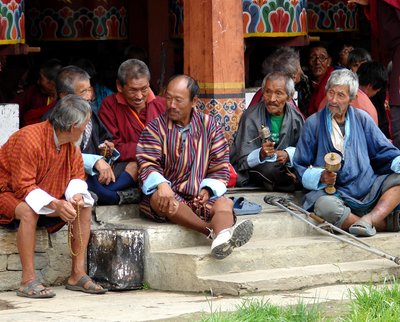 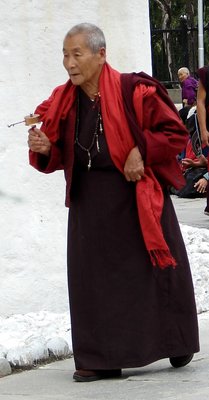 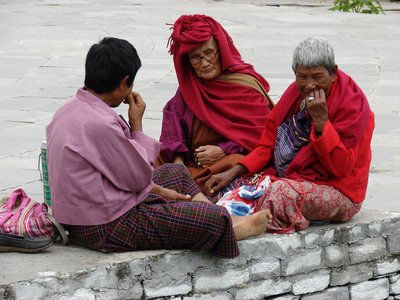 I circled, looking for good photo shots. I had gone up the steps of the temple itself to get a better view, when a young monk, perhaps 12 years old, beckoned me inside. I slipped off my shoes and followed. The ground level contains four shrines, one in each of the four cardinal directions, each with different photographs of the 3rd King. The eastern shrine included a large statue of the historical Buddha. Fruit, food stuffs, and money had been left in offering. Up steep narrow stairs, there are two more levels, each with four more shrines. A huge wooden carving occupies the center of the building, reaching up through all three levels, behind the shrines. The carving displays hundreds of protective deities, some looking pretty wrathful, and scenes from the bardo, the short stage in which the spirit is judged and awaits reincarnation. We circled the second story three times, then stepped out on to the roof over the first level, where we overlooked the crowd. A majority of the people were older, often elderly, and dressed in red or purple, indicating that they were lay clergy or just very devout. 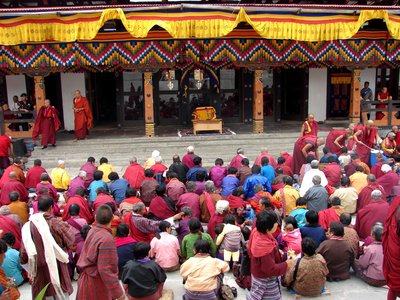 Two tents were set up to cover some of the crowd. The smaller one had chairs for dignitaries. 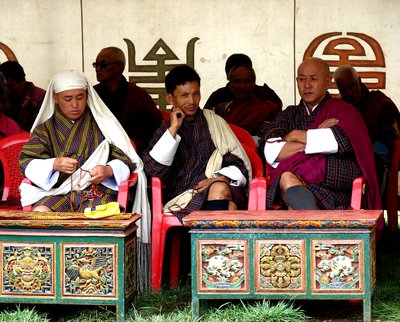 Back outside, I made sure to complete three circuits of the temple. Shortly after I finish, a few groups of monks hurry around the left side of the building. The Je Khenpo was about to speak. I found a spot in the back and stayed to listen. His speech was all in Dzongka, and he made few gestures, so I didn’t stay long. 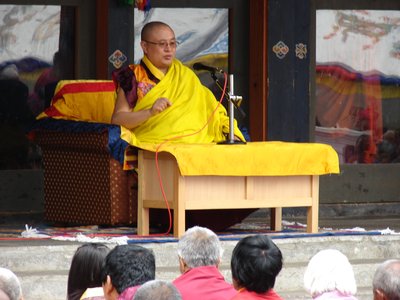 Wonderful pictures and narrative. I look forward to future entries.