There is so much to see and do in Paro (the small town about 1.5 hrs from Thimphu where the airport is) that we had to return. We were hoping The National Museum of Bhutan might have some history books for sale, so that was our first stop. The museum is high up on a hillside overlooking the town and its dzong. In fact, the museum is in an old watchtower of the dzong (fort). It was built in 1656 and extensively renovated in 1968, when it became the museum. It is a circular building with seven stories (ground floor through sixth floor). 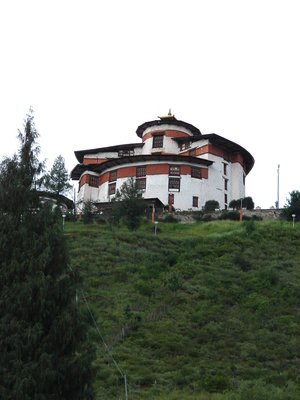 You enter on the first floor where there is a small exhibit of stone tools found in Bhutan and dating from 2,000 BCE. Then you’re directed up to the fourth through sixth floors, seeing the rest of the exhibits from the top down, and always circling in a clockwise direction. If done right, the exhibits are in chronological order. The exhibits feature bronze and copper urns and cooking pots; cane, bamboo and wooden containers; arms and armor; Buddhist ritual objects, jewelry, ancient teapots, wine containers, coins, and stamps. The 2.5 meter thick walls are perfect for inserting diplay cases. A large gallery features thangkas (traditional paintings mounted on banners) of all of Bhutan’s important historical and religious figures; some of the thangkas are as much as 800 years old. There are two chapels in the museum. One is to the god of wealth with walls lined with nooks housing different representations of the god through the centuries from all over the country. The other houses a huge clay sculpture assembly, a three dimensional mandala representing the four schools of Mahayana Buddhism, their founders and lineage holders, and major deities facing the four directions.

After the museum and lunch, we drove to the north end of the valley, until the paved road became a donkey track, to see the ruins of the Drukgyel Dzong, constructed in 1649 to commemorate a military victory over the Tibetans, as well as to watch over the road to Tibet (which still gets some use to this day). In the 1950’s, a fire started by butter lamps destroyed it. The ruins are in a grove of tall cedars and have a mysterious air. Without its coat of white paint, it reminds me of a ruined castle. To keep it from completely disintegrating and to make it safe for visitors, roofs were set up over the gate, gate house, and central tower, and parts were propped up with new beams. 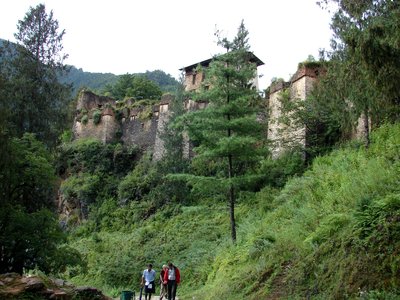 From the road, we can see the Tiger’s Nest Monastery, high up on a cliff on the opposite side of the valley. We have to save that for another visit, after the rainy season ends and the rocky path is not slick. 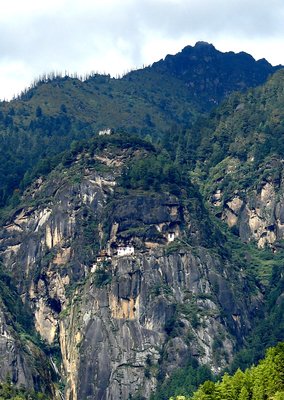 Finally, we make a quick visit to the Paro Dzong, still a monastery and center of the district government (and the setting for parts of the movies “Little Buddha”), before heading home. As usual, we can only take pictures of the outside of the dzong and its courtyards’; cameras are forbidden in the temples. 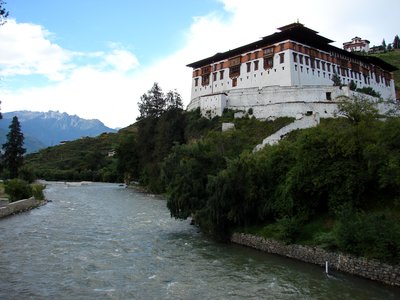 See my photo gallery for all the pictures from this day: https://www.travellerspoint.com/gallery/users/rsherry/