A holiday season for both Buddhists and Hindus in Thimphu began on Thursday September 17 with a “puja” for cars. A “puja” is a religious offering, prayer, or action. One taxi driver told me it was the day of the god of vehicles and mechanical devices. I interpret it as a day to ask a blessing for your car or vehicle. Things began the day before when small shops put out gaudy displays of colorful garlands of paper and plastic, shiny foil and faux flowers, along with large, bright Hindu-style pictures of a god. The next day, cars, trucks, tractors and motorcycles were all cleaned and decorated. 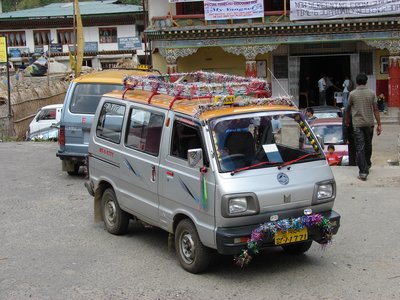 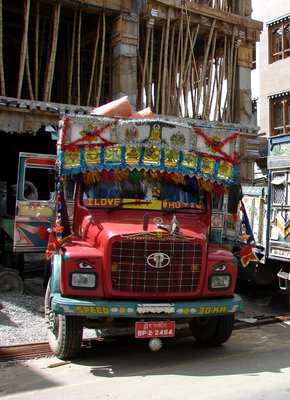 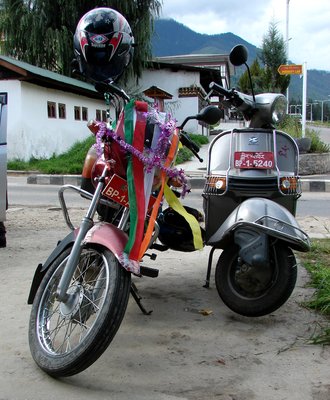 Most of the decorations were gone the next day but some remained for weeks.

Friday was a puja of water. Large trucks full of shouting men collected holy water from mountain springs and used it to bless places in the city. 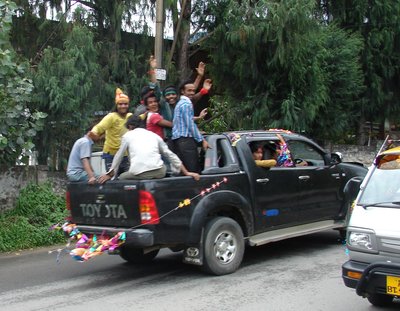 Over the following weekend, many guests and visitors came and went from our landlady’s home, some with dishes of food. Sunday, we awoke to the occasional bleating of a goat. Our Buddhist landlady had bought fourteen goats from a butcher to save them from being slaughtered by the “Nepalis” for their upcoming holidays. These goats weren’t petting zoo animals, but neither were they afraid of humans or dogs. Here’s Noah trying to sneak up on them: I don’t think he ever managed to pet them. 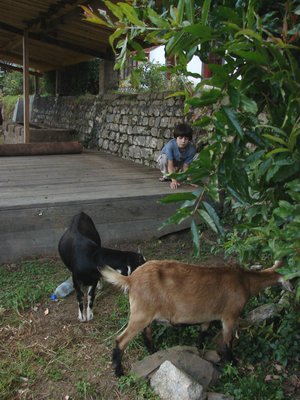 The goats marauded through the compound for about a week, eating weeds, grass, bamboo, and rose bushes. They had just started on the hibiscus when they were loaded on a truck to be released in the mountains. They never touched all the potted fuschias.

Tuesday September 22 was the first official holiday when schools and government offices were closed. Noah’s school took its fall break at this time, closing from September 21st through Oct. 4 to avoid all the holiday closings. That Tuesday was the “Blessed Rainy Day,” celebrating the end of the rainy season. I’ve read that many years there is no rain after this day, but not this year. The monsoons are starting later, being very sparse until August, never reaching their old intensity, but lasting longer into the fall. On this day people dress up and visit their temple or dzong. Shopkeepers also began to hold sales, putting goods on display on the sidewalks, causing major pedestrian congestion, as people generally get a set of new clothes and toys for children during this season. This day also marked the beginning of a butter shortage. Butter and sugar are used make tormas, figures offered at shrines and temples and later thrown into rivers or fed to birds. I’m told the shortage also has to do with the Indian festival of Diwali, coming up in about a month, when thousands of butter lamps brighten the night. On Wednesday, a folk craft fair began in clocktower square that lasted a week with vendors selling native crafts, fabric, jewelry and traditional foods. 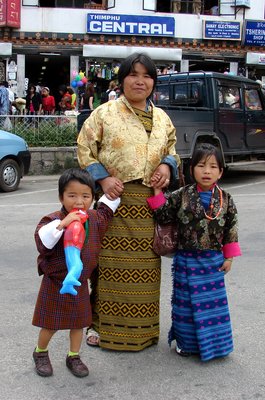 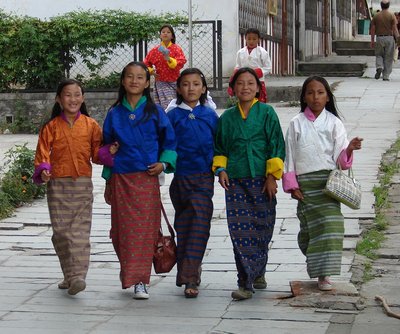 Thursday September 24th was the next official national holiday, Dasain. This Nepali festival is both a harvest festival and a celebration of the victory of Lord Rama over the demon king, Ravanna. Much meat is slaughtered and consumed, and elders bless eeach member of the family by pasting uncooked rice on their forehead with curds. In Nepal, I’ve read this holiday lasts for 10 days, much of the festivities being held at home. In celebration in Bhutan, all Hindus took Monday September 28th, off from work, and the devout also visited their temple. 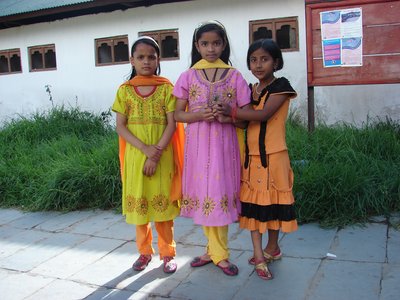 September 28th also marked the beginning of the Thimphu Tsechu, or festival. Each of the 20 districts of Bhutan has its own tsechu, all staggered at different times of the times of the year, so that none overlap. All the Tsechus last 3 –10 days and honor Guru Rinpoche, who brought Buddhism to Bhutan in the 8th century (although I learned at the National Museum that there was a nun teaching Buddhism here about 100 years earlier). People dress in their best clothes and jewelry and take a picnic lunch to the local dzong to watch ritual dances. All the dances are old, some said to have been created by Guru Rinpoche himself, all carefully record in ancient texts, and recreated step-by-step, in exactly the same manner, for over a millennium.

Hi
I am the administrator for Bhutan Link http://www.bhutanlink.com. It's a virtual tour website of Bhutan. It might be useful for people who are interested in Bhutan
THanks

Delightful!
Ed Kearns and his tricycle would fit right in! And it's probably a good thing that Noah wasn't able to sneak up on the goats ... they have sharp hooves and tend to butt, as well! This is a wonderful photo/journal! Thanks for sharing!
Mary Francis