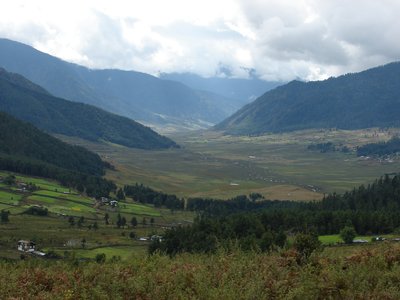 The bottom is about 4km wide and very long, long enough that some residents
migrate each year from summer homes at the north end to winter homes at the
south end. The bottom of the valley is one long marsh were cattle are allowed to
graze most of the year. From November to February, the marsh is the winter
roosting ground of a growing population of endangered black-necked cranes. 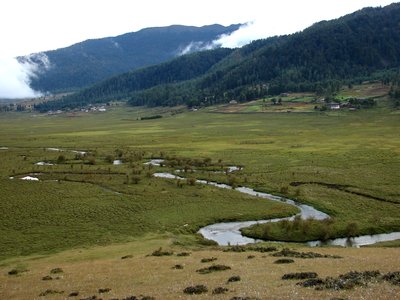 Above the wet are picturesque strips of potato fields dotted with farmhouses. 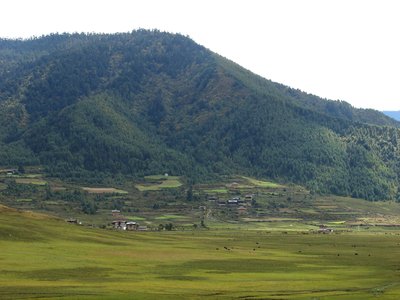 Above these are Himalayan blue pine forests that reach all the way to the tops of
the lowest hills. The highest forests around the valley include hemlock and fir. The
land around Lawa La Pass (3,360m, 11,020ft) at the north end of the valley was
cleared long ago, making meadows of dwarf bamboo where yaks are brought to
winter. If you take the dirt road down off the pass, it follows a ridge that sticks
out into the top end of the valley. At the end of the ridge lies Gante Goemba
(“hilltop” monastery), the focus of religious, political and social life in the valley.
A small village has sprung up along the road leading to the monastery. Really, it's
the prettiest village I've seen in Bhutan. 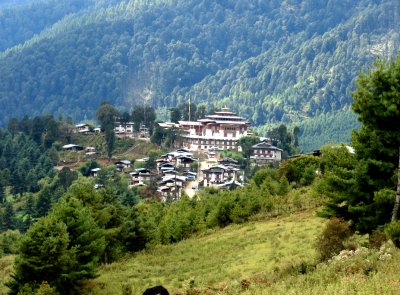 Below the monastery in the marshy bottom, a spit of high ground breaks into two
lobes, where they meet is a large chorten, which has a story.

The story goes that long ago there lived a demoness in the valley, and every year,
on the first day of tsechu (annual festival), she would kill the first person arriving
at the monastery in the morning. One year there was a pair of lovers who lived in
different villages far apart in the hills on opposite sides of the monastery. They
were very eager to see each other at tsechu and consequently were the first to
arrive at the monastery on opening day. They had a lovely day, watching the
dances, talking to friends and relatives, holding hands, and picnicking on the hillside.
They parted reluctantly at sunset, each going home to their own village. As they
made their way home, the demoness confronted and killed the boy, for he had
arrived slightly earlier at the monastery that morning.

Everyone knew the signs, knew who had killed the boy and how. His young lover
was distraught and vowed revenge. When she tired of mourning, she gathered her
strength and apprenticed herself to the most powerful magician in the valley, and
began to learn all she could, especially of black magic. She never married, but with
time became a very powerful witch, known even beyond the valley. Eventually, in
middle age, when she was at the height of her powers, she sought out the demoness
and, using all her accumulated knowledge and power, destroyed her. She erected
the chorten over the dead body of the demoness, on the chest between the two
breasts. It stands below the monastery at the head of the Pobjilkha Valley to this day. 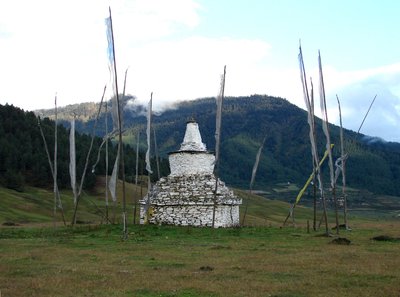 When I visited Pobjilkha, the potato harvest had just ended, and sacks of potatoes
were stacked at intervals on the roadside. It’s too high (2,900m or 9,500ft) and too
cold to grow rice here; the grains don’t firm up. On our way out of the valley back
to Thimphu, we often found ourselves behind trucks piled high with potato sacks
or filled with giant logs from the surrounding neighboring valleys and gorges where
ancient forests of giant blue pine and hemlock tower over understories of
rhododendron trees.