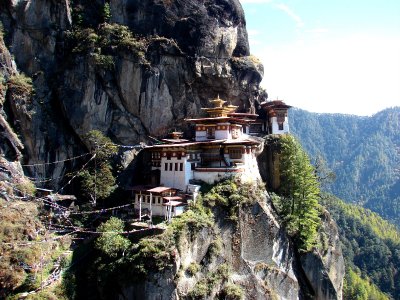 RIM has finished training another group of Japanese volunteers. To cap off their orientation, they took a field trip to the famous Tiger’s Nest (Taktshang Lhakhang), the temple to Guru Rinpoche Padmasambhava that hangs on the edge of a cliff 900 m (2,950 ft) above the valley floor, and we were invited to go along. The RIM bus picked us up at 7am Sunday morning, then went to the south end of town to pick up a few RIM staff and students, then to RIM to load up a picnic breakfast and lunch, and meet the Japanese volunteers and a few more RIM staff and students.

After the one and a half hour drive to Paro, the bus stopped at the Paro Sunday market. Some of the Bhutanese bought prayer flags and food items to leave as offerings when we reached the temple. The base of the trail to Taktshang is a bit further up the Paro Valley, starting at 2,600 m (8,530 ft) in a shady pine forest. Here folding tables and our breakfast of egg rolls, momos, carrot and mayonnaise sandwiches, and tea was served. Most people started up the trail immediately after breakfast, but we had arranged for a horse to carry Noah most of the way up the mountain. 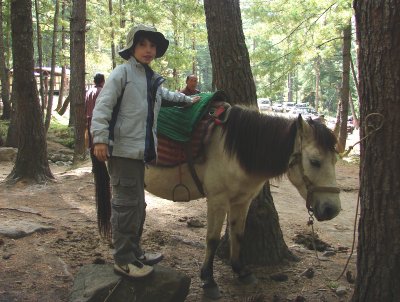 After the horse leader arrived, Mike took off ahead of us and I didn’t see him until two hours later when we had all reached the temple. A bit deeper into the forest we crossed a narrow stream that kept a row of three large prayer wheels continually turning; each was in a small house. 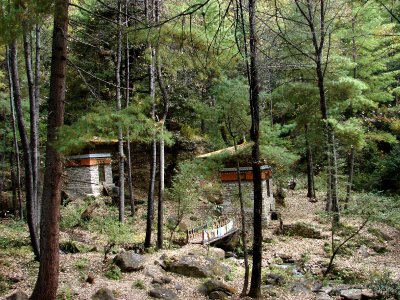 The trail is a bit steeper and has fewer switchbacks than a constructed trail in the US would have. I huffed and puffed to keep up with horse. We soon overtook the slowest of our group, one 74 year old Japanese man, two other Japanese in their sixties, a 70 year old Bhutanese woman, and a couple of young women from RIM who choose to walk with them. The rest of the hike I huffed and puffed to stay ahead of them!

Horses only carry people up the mountain; it is too steep for people to ride down. On our way up we passed lines of empty pack horses and mules that had carried people up earlier that morning. About halfway up was a large, relatively flat, open area with a huge prayer wheel, a few vendors, and a small restaurant (a bit off to the side of the trail). I caught up with Noah here and we rested for a short time. 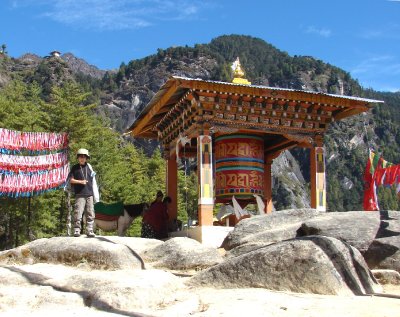 After another 30 minutes, we passed a small building marking the birth place of the last Je Khenpo (religious head of the country) and reach another relatively flat area. Here the wide dirt trail ends and we can see Taktshang below us about 150m away on the other side of a deep gorge. 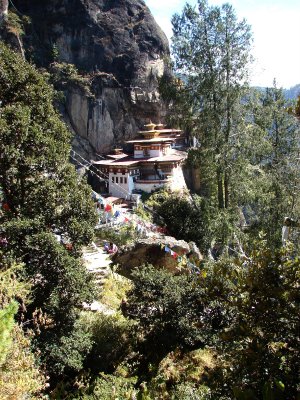 We had to leave Noah’s horse there. A series of steep, winding, narrow steps with a sharp drop on the right side leads us down into the gorge. Noah runs on ahead, but I am reminded of the steep steps that Bilbo and Sam must climb on their alternate route into Mordor. I go slowly and carefully. 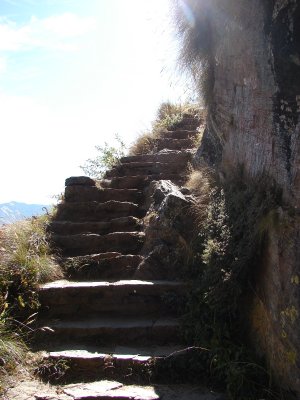 The steps widen after a bit and my dizziness is relived. About 70m down the gorge, a bridge crosses a spectacular waterfall. 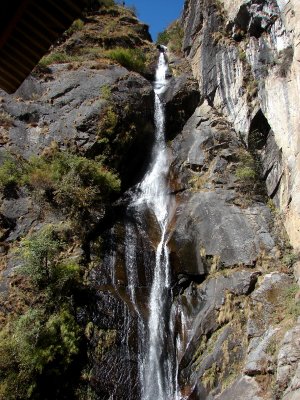 Just after the waterfall, a small house is tucked into a crevice, covering the entrance to a meditation cave. 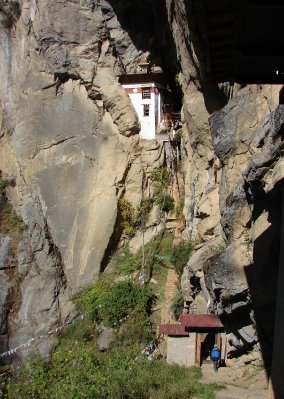 Then a last set of stone steps leads back up the gorge to the temple.

At the beginning of the temple complex is a shrine to the local goddess. 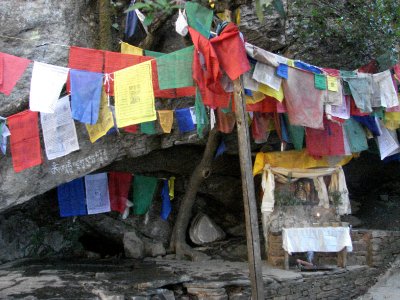 At a flat terrace we have to leave our backpacks and cameras. Inside the gates of the temple, Noah becomes disheartened at the sight of another flight of wide, deep steps, each about double the regular height of a regular step, but on the walls above us are fantastic old paintings of Jampelyang (lord of wisdom), Channa Dorji (god of victory), and Chenresig (god of compassion). We are first lead to the most important chapel, though it is one of the smallest. Here is a statue of the Guru Rinpoche in one of his fierce forms, standing on the back of a tigress. When Guru Rinpoche was first called to Bhutan, one of his two consorts transformed herself into a tiger. On her back he flew to this spot where the temple now stands. To the left of the altar, covered by a golden door, is the entrance to the cave where the Guru mediated for three months after his arrival. Then he emerged to subjugate the eight categories of evil spirits and convert the Paro Valley to Buddhism.

We are lead in succession to other small temples, one to the Guru in another of his manifestations, one to the Buddha of long life, one to Tara, one to Ganesh, and others. The last temple I visit is the largest, dedicated to the founder of the monastery. A trap door in the floor allows a look down into the Guru’s cave. I am too late to visit the other large temple, which contains a chorten with the bones of the Guru’s main disciple, because the caretaker has gone to lunch.

On my way back down the gorge and up the other side, the steps don’t seem bad at all. I notice a shack that which I thought was a tea shop when I first passed. It turns out to be a temple to the consort who changed herself into a tigress. Guarded by an old nun, it also houses the butter candles associated with the temple complex.

As many dzongs and temples have been destroyed by fires over the years, it has become the custom to house the 108 butter candles that used to surround the main altar in a separate building, usually in the courtyard. Taktshang itself was destroyed by fire in 1998, meticulously restored, and reopened in 2005. The site had been considered holy even before the arrival of Guru Rinpoche and many famous Buddhist masters have meditated here. The first temple was built here in the 14th century, with more temples added individually until 1692.

There are hermitages on the top of the mountain above the temple, 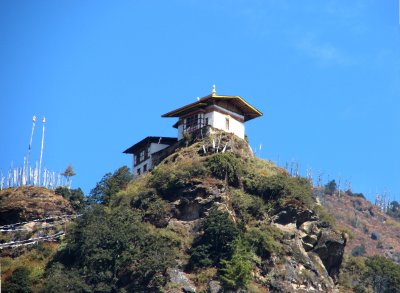 but we hurry back down the mountain to our picnic lunch in the trees. 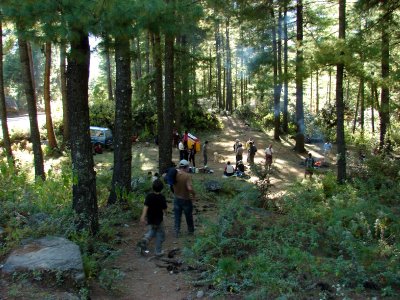