Pilgrimage to the Seat of Enlightenment

So far, we have made one foray out of Bhutan and into India, Nov. 8-10. DrukAir flights to Bangkok stop in Gaya, in the Indian state of Bihar. The tiny airport serves pilgrims on their way to Bodh Gaya, the town that has sprung up around the site where Siddhartha, the historical Buddha, attained enlightenment under the Bodhi tree. We took advantage of this to make the trip our selves. The nearly empty, four-gate terminal may be the only airport in this predominantly Hindu country with a large Buddha inside the main entrance (also the exit) of the terminal. The music from their loud speakers is a very haunting chant; I never was able to figure out what it was.

The tree at the centre of this UNESCO World Heritage site is a Ficus religiosa, or sacred fig, commonly know as the Bodhi tree. A temple complex has grown around it over the years. The first temple was built here about 250 BCE, about 250 years after Buddha, by the Emperor Asoka. Some of the railing around the tree date from this time. Asoka’s daughter is said to have taken a branch from the tree and planted it in Sri Lanka, where another famous temple complex was built. Asoka also placed a stone seat beneath the tree on the spot he thought Buddha sat, which has become known as the diamond throne. Legend says that Asoka’s wife grew jealous of the time Asoka spent at the tree in prayer and meditation and killed the tree by stabbing it with a knife. A cutting from the tree in Sri Lanka was sent for and planted on the same spot, which is believed to be the navel of the world by some Buddhists and Hindus.

The current temple was built on the site of Asoka’s temple in the 6th century and fell into decline in the 12th century when Muslims invaded the region. Although some repairs were attempted, the largest and last renovation occurred in the 1880s. The temple is built of brick and rises to an impressive height of 55 meters. Words really can’t do it justice, so here's a picture: 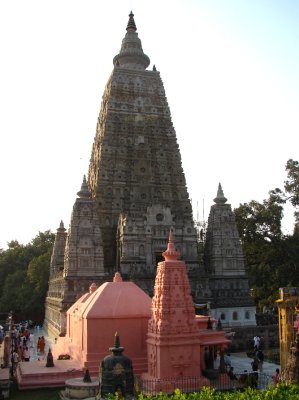 Although we had to take our shoes off at every temple, they didn't bother to prevent picture taking because of the large numbers of tourists and pilgrims. 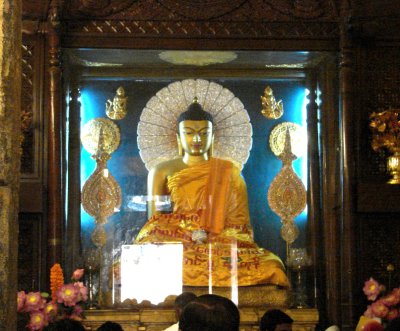 Inside the Mahabodhi Temple

Today both Hindus and Buddhists revere the spot and come on pilgrimages. Flocks of monks are in constant attendance, some chanting around the tree, other doing prostrations in the gardens that surround the temple.

Every Buddhist country in Asia has built a temple or monastery nearby. These are fascinating in themselves, reflecting the culture and style of their home country. We found the Veitnamese temple to be the most peakceful. 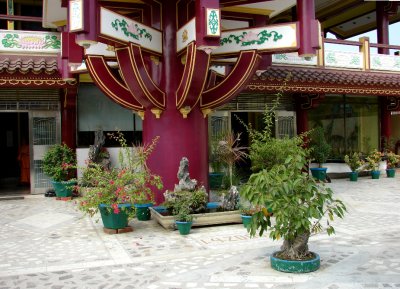 The population of the town includes many Tibetans, who have their own market at one end of town. At the end of the street down from the Tibetan temple, the Dalai Lama built a giant Buddha statue, 25 m high, containing inside 20,000 smaller Buddhas, and surrounded by statues of Buddha’s disciples. 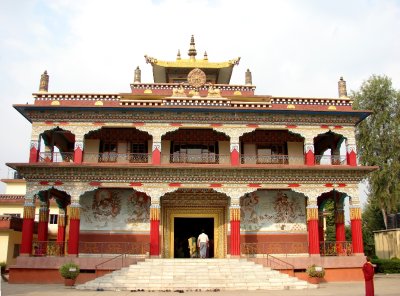 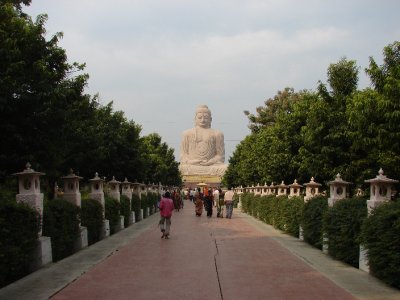 To see more of my pictures from Bodh Gaya, visit https://www.travellerspoint.com/gallery/users/rsherry/