Gardens at the Top of the World

Bhutan has a huge and diverse flora of about 7,000 plant species that spans tropical forests in the south up through temperate broad-leaved forests to pine and fir forests and up past timberline to alpine meadows. It's especially known for its rhododenrons (48 species), orchids, and ferns. Many of our garden plants come from the Himalayas, such as azaleas, camellias, poppies, alliums, lillies, magnolias, potentilla, saxifrages, and dozens of species of primroses and rhododendrons, just to name a few.

Bhutan inaugurated its Royal Botanical Garden just a few years ago, in 2005, though work started in 2000. It is associated with the National Biodiversity Centre, the National Herbarium, and the Royal Bhutan Gene Bank (currently for domestic animals and crops) in Serbithang, about 15km from Thimphu and another 1,000m higher in the hills, at 2,500m in elevation (8,200 ft above sea level). It is still in its infancy in terms of plant collections, but has lovely views and a great rock garden. 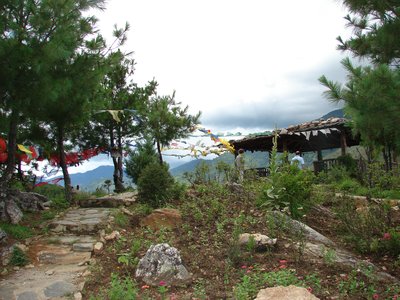 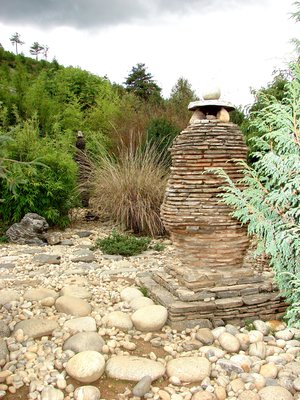 I took a Saturday to drive up to the highest pass in Bhutan with a paved road, Chele La, about 4,000m in elevation (13,120 ft above sea level). The drive took me towards Paro and then up through forest of Himalayan blue pine and then alpine fir draped with lichen. The understory was dominated by rhododendrons, which are spectacular when they bloom in the spring. The fir gradually gave way to shrubby rhodendrons and willows, and finally to alpine meadow. Like all acessible high points in Bhutan, the surrounding knolls were covered with prayer flags. 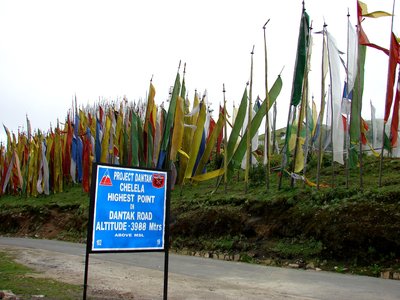 On one side of the road was a picnic table, a prayer wheel, and a oven for burning incense. 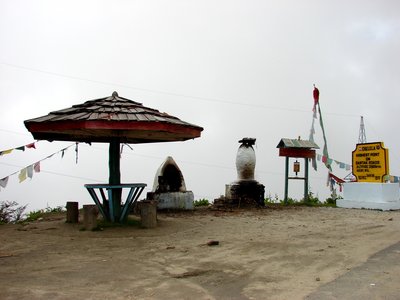 It's still the rainy season, so the view was not as spectacular as it will be, but the flowers were amazing. 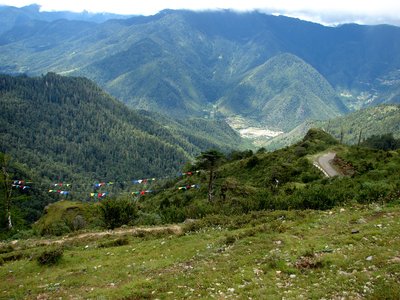 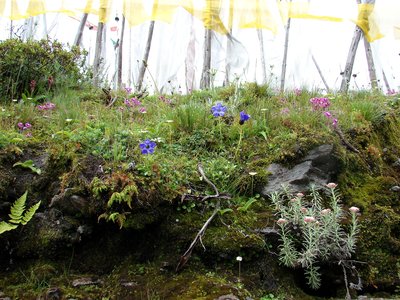 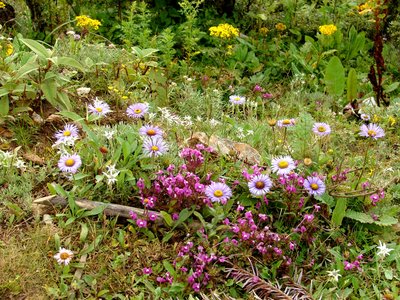 And what alpine adventure would be complete without edelweiss? 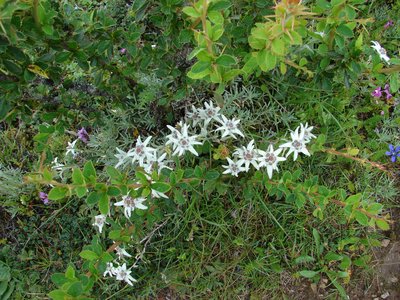 Finally, here's a couple more pictures of the surroundings at Chele La. Also, you can see more of my pictures at https://www.travellerspoint.com/gallery/users/rsherry/ 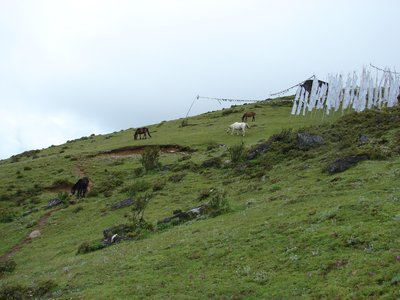 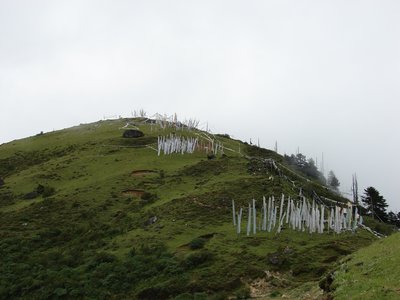 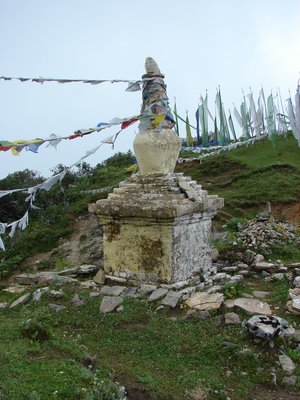 In 1972, Bhutan's fourth hereditary King Jigme Singye Wangchuk proclaimed that Gross National Happiness (GNH) was more important than Gross Domestic Product, http://www.pbs.org/frontlineworld/stories/bhutan/gnh.html. This proclamation, which did not focus primarily on traditional economic measures to gauge societal progress was made in response to modernization and economic globalization changes and pressures on the relatively pastoral and isolated primarily Buddhist Kingdom of Bhutan. These modernization pressures could have significantly changed Bhutan's unique identity. As a result of this proclamation, GNH has become one of the primary national public policies guiding and regulating development in Bhutan.

Since 1972, an ongoing process has been occurring to describe and tease out in further detail what GNH means and how to measure it. Two primary institutions in Bhutan are currently involved in this effort. They include the Centre for Bhutan Studies, http://www.bhutanstudies.org.bt/main/index.php a non-governmental organization in Thimphu and the Gross National Happiness Commission, http://www.pc.gov.bt/ a government agency that was formerly called the Planning Commission. The process of further delineating GNH has already included four important international academic conferences to discuss what GNH means. A fifth international conference is now scheduled to take place in Brazil in late November 2009, http://www.bhutanstudies.org.bt/main/highlight_detail.php?id=47

Happiness under GNH is not defined as individual happiness such as life, liberty, and the pursuit of happiness as we know it in the U.S. Rather happiness under GNH is a holistic idea that balances the material with the spiritual for the benefit of the greater society. In more specific terms GNH has been described as having four mutually balanced general pillars including: sustainable development, maintaining cultural values, preservation of the natural environment, and good governance. Recently, this has been further subdivided into nine core dimensions, http://grossnationalhappiness.com/gnhIndex/intruductionGNH.aspx including:

These nine core dimensions now have 72 numeric indicators, http://grossnationalhappiness.com/gnhIndex/gnhIndexVariables.aspx. These indicators are weighed equally together to come up with a final calculation of the general happiness of Bhutan, http://grossnationalhappiness.com/gnhIndex/intruductionGNH.aspx The indicators are determined through national surveys. Of course, not everyone in the country is happy for a variety of reasons and issues.

In the days to come I will continue to dig much deeper through careful research of first-hand and original sources into what the four pillars and nine core dimensions mean from a theoretical and philosophical perspective to provide a nuanced description of GNH and also how it links to Bhutan's current ban on tobacco use.

Last Sunday, August 2, we spent the afternoon at Changlimithang National Stadium watching a friend of ours compete in the Yangphel archery tournament. The stadium houses tennis and squash courts, a soccer field, a cricket ground, 2 archery fields, and Bhutan’s Olympic headquarters. Events are free and open to everyone. That afternoon, an informal cricket match was in progress. 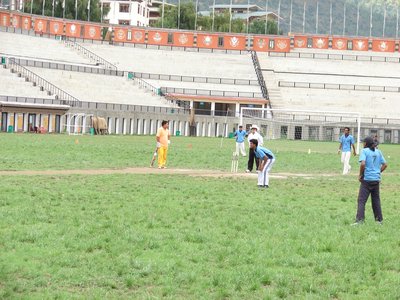 One thing that makes the archery matches here so fun to watch is the shouts and taunts one team will throw at the other. No need to remain quiet at all, even as an archer is taking aim. When the target is hit, a little victory song and dance are requisite, sometimes with a response by the other team. The songs and dances are tradional, hundreds of years old. This day at Changlimithang was pretty quiet, not much of a crowd, but here’s a little example:

The 39 day Yangphel archery tournament is the equivalent of a national championship. Hundreds of six man teams from all over the country participate in elimination heats, leading to quarter finals, semi-finals, etc., and at last the finals on Aug. 11. Best archer will win a car. Runners up and top teams will receive prizes ranging from refrigerators and microwave ovens to cash. Our friend’s team, Club Ace (below), is playing again Aug. 10, but are not yet guaranteed any prizes. We’ll have to go back Monday and see how they do. 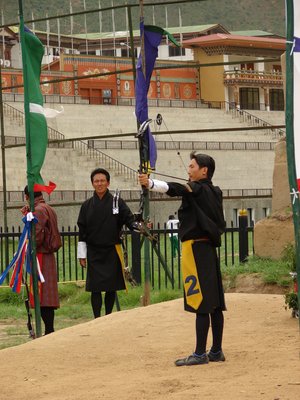