The Delhi airport is very clean and modern. We changed money and paid 610 rupees for a government-approved air-conditioned taxi. Several policemen in tan uniforms were coming in and out of the airport exits, some with small rifles slung over their shoulder. Some of the policemen wore dark blue berets, others tan berets, and others bright blue Sikh turbans. Outside, the airport was very dusty, even in the dark. Two large cranes dominated the view. The airport is undergoing massive expansion. It was warm and humid, but only in the 80s.

Our driver was very good. He knew when to cross to the other side of the street to pass ten cars at once, and when to sneak left to pass just one or two. (They drive on the left here.) The horn is used as commonly as the gas pedal. The brightly painted trucks even say on the back “Blow Horn” or “Use Dipper (sic) at Night.” Lane lines mean nothing. At one point I thought of the dramamine buried somewhere in my luggage. At 9:30pm the roads were still crowded with cars, ice cream carts, and especially trucks. Most buildings were dark, just a light here and there, but occasionally we’d pass a restaurant pouring light and people (men) onto the street. Not many women around at this time of night. Near our hotel the streets were almost empty. From the window of our 18th floor hotel room, the city lights seem to stretch on for miles.

In the morning we can see what’s out there. One very tall smoke stack, four unfinished and abandoned concrete sky scrapers, a school with domes, sports fields, and a large swimming pool, a few domed white temples with minarets, and buildings as far as the eye can see. 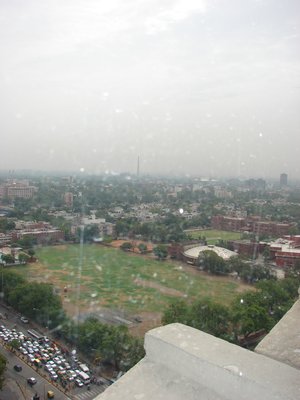 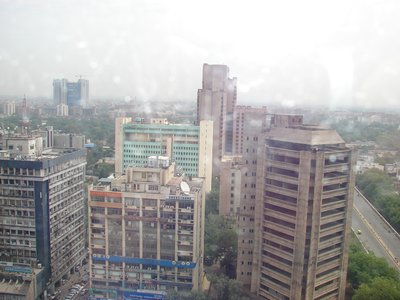 A thin brown line hangs above the city, about at the level of the smoke stack; it disappears later in the day. There must have been a short rain earlier that morning, the streets and the streets and sports fields are wet. Later, I find a newspaper headline declaring “Monsoons Arrive but Miss West Rajasthan.”

We stay in our room all day and sleep. It is looking much better in the afternoon when we go down to lunch. There is another large buffet which is just closing, so we have to order off the menu. Noah gets hot chocolate and chicken fried rice. I order vegetable momos, described as Tibetan steamed dumplings. They are good, but salty, as is Noah’s rice, which was prepared “unspicy” for him. Breakfast the next day is similar, with several items swapped out. Today there is lichi juice, Burmese noodles, raisin pancakes, chickpea curry, and a lamb hotpot.

On our un-air conditioned ride back to the airport, we see that there are also pretty parts of Delhi, and monkeys! and horses! We don’t see any cows, though. The streets are even more crowded mid-morning than at night, with cars, buses, motorcycles, three wheeled blue and yellow mini-taxis, but no trucks.

There are no signs to direct one to the different airline counters in the Indira Gandhi International Airport. I ask a couple of young women in airport uniforms where the Druk Air desk is and they direct me to the other end of the terminal. There’s no Druk Air desk in the last row of counters. I ask another uniformed woman and she says, “Well, it’s not here.” We walk along the next row of counters, no Druk Air. On our way to the next set of counters, I see a man in a traditional Bhutanese gho and black socks and shoes. I wave, saying “Excuse me, sir,” but he waves me off, turning to his cell phone. In the next row I ask the first uniformed personnel I see and am directed right across the aisle to the end of the row of counters. Finally, Druk Air!

We have to pay for overweight luggage, so I have to go find a currency exchange. When we get back to the Druk Air counter, 24 bags are being checked in at the first class desk. Another man in a gho is counting the bags and putting “Fragile” stickers on them. The young woman behind the counter giddily tells me that the Prime Minister of Bhutan is on our flight! Could I have tried to flag down the Prime Minister of Bhutan to ask for directions? No, more likely just one of his entourage.

On the plane, we are seated with a group of older French women on a tour. The passengers on our flight are pretty much half Asians and half Westerners. Noah has a left window seat on the plane, but it will prove too cloudy to see the high peaks. Above the haze of Delhi, the sky is bright blue.

Nepal is green! no skyscrapers. Katmandu lies in a broad valley bounded by green and blue mountains. Disembarking and embarking in Katmandu is via the rear of the aircraft so as to not disturb those in first class. The people getting off all look Indian or Nepali, those getting on are other Asians. A mist descends on the tarmac and I can no longer see the mountains but it is gone by the time the airplane turns around for takeoff. Then we get a better view of the city, which completely fills the bottom of the valley. Lots of five story apartment buildings, white cement or stucco, red brick or tile, and rusted corrugated roofs. We can see the gold spire of the famous Bodhnath stupa rising out of the buildings, not far from the airport.

The Paro Valley in Bhutan is narrow, with emerald green fields and blue-green mountaintops. On our descent we turn a corner in the valley and skim the treetops. The wing tips almost touch the trees on the far side of the valley shortly before we reach the runway. Stepping off the plane in Paro, I am momentarily blinded by green. Well, ok, it was probably really the sunlight, and the very fresh, clean air. 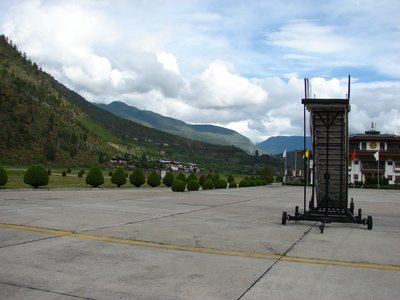 I take a number pictures of the airport buildings and the billboard of the five kings of Bhutan before going in to customs, a health check and Mike. 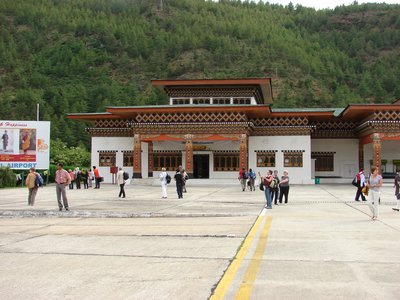 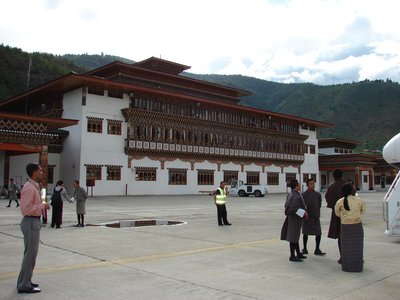 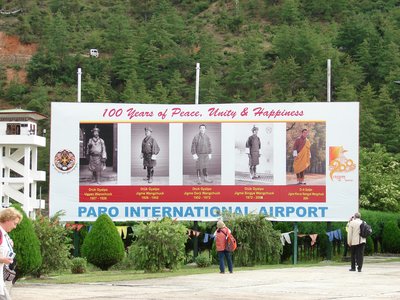 In our informative ongoing orientation, the seven Japanese volunteers and myself received a great overview on the natural environment of Bhutan. Bhutan is a very beautful and rugged country. There are three general eco-zones including subtropical in the south, alpine forest in the middle, and cold alpine tundra in the north in the high Himalayas. One hundred percent of the country is covered by mountains and 72.4% is covered by forests. Fresh water is in abundant supply, which includes about 2500 mountain lakes. Currently, in Bhutan, there are over 300 medicinal plants, 50 species of rhododendrons, more than 40 species of orchids, and over 770 species of birds. Various publications on Bhutan's environment can be found on the web site of the Bhutan's National Environment Commission, here: http://www.nec.gov.bt/publications/publication.html

According to the Bhutan National Environment Commission, see: http://www.nec.gov.bt/ there is a strong commitment to keeping 60% of Bhutan in forest cover permanently. Major environmental issues, though, facing Bhutan include global climate change, waste management, and watershed management.

A very good video on the philosophy and practice by Bhutan to protect the environment can be viewed here: http://www.youtube.com/watch?v=KcAjE--rQQE

Getting to Know Bhutan and Thimphu

The seven Japanese volunteers and myself are receiving an intensive orientation of Bhutanese customs, history, cuisine, dress, arts and culture, and politics. The Japanese volunteers are all in their 20s and have professional backgrounds in engineering, education, health care, and information technology. They are associated with the Japan International Cooperation Agency--Bhutan, http://www.jica.go.jp/bhutan/english/

In the mornings, we listen to lectures on conversational Dzongha, traditional dress, Bhutanese cuisine, Bhutanese culture, and Bhutanese politics and history. In the afternoons we go on guided tours. So far, we have visited the headquarters of Bhutan's national newspaper--Kuensel http://www.kuenselonline.com/ and the studios of the Bhutan Broadcasting Service, http://www.bbs.com.bt/ Both of these tours were quite informative providing extensive background and the history of these two key media outlets. One issue, for instance, that the BBS has encountered recently is the amount of coverage that they can do while the Bhutanese parliament is in session. Bhutan about a year and half ago transformed from a hereditary monarchy to a constitutional monarchy complete with a parliament, prime minister, and U.S.-style Bill of Rights.

Today, June 30th, we visited the Royal Academy of Performing Arts, http://www.raonline.ch/pages/bt/visin2/bt_dance01.html The eight of us were entranced by a special dance performance of several traditional and classic Bhutanese songs and dances complete with cymbals and very long Bhutanese style horns. We later visited the Bhutan National Handicrafts Emporium in central Thimphu, http://www.colorsofbhutan.com/. The Emporium contains numerous traditional clothing, bamboo craft, fine jewelry, wood carving including masks, stone work, paper making and musical instruments crafted throughout Bhutan. Next door is a non-governmental organization--National Women's Association Bhutan, which sponsors artists who are painters and wood carvers, http://www.nwabbhutan.org.bt/ We watched as several of the artists painted before our eyes traditional paintings and carved traditional masks.